This is an abridged version of a study that was conducted in 1994. The purpose of this paper is to derive a cycle relating the lunar cycle to an equity average. This cycle will then be evaluated for its profitability versus a buy-and-hold strategy. The results may be of interest to short-term traders with an interest in cyclic analysis.

Those who seek a causative link might consider the following. Serotonin is the substance in the brain of a homing pigeon that sensitizes the bird to the earth's magnetic field, allowing the pigeon to 'home in.' The field itself has been shown to fluctuate with lunar and solar influences. Nelson's work demonstrates a relationship between all of the planets and solar activity. Serotonin exists in the human body. The substance was neglected until biotechnology companies recently took an interest. Perhaps this is the link.

The Link to Markets In John Murphy's text, Technical Analysis of the Futures Markets

He writes, "There is another important short-term cycle that tends to influence most commodity markets- the 28-day trading cycle. In other words, most markets have a tendency to form a trading low every 4 weeks. One possible explanation for this strong cyclic tendency throughout all commodity markets is the lunar cycle. Burton Pugh studied the 28-day cycle in the wheat market in the 1930s and concluded that the moon had some influence on market turning points. His theory was that wheat should be bought on a full moon and sold on a new moon. Pugh acknowledged, however, that the lunar effects were mild and could be overriden by the effects of longer cycles or important news events."

John McGinley, writing in Technical Trends, once mentioned that Arthur Merrill conducted a study of market behavior around full and new moons and found no strong correlation. More recently, the February 27,1994 issue of Mark Liebovit's Volume Reversal Survey stated that he had noted a correlation between the lunar cycle and Federal Reserve actions. Chris Carolan, noted for his work with the Spiral Calendar, has achieved some success with a lunar-based forecasting system. Indeed, many older societies utilize a lunar calendar. Our own calendar year is based upon the movement of the earth around the sun. Those technicians who rely upon the annual cycle (the average percentage change in the DJIA from January 1 to December 31) are looking at an astronomically based cycle.

The lunar cycle is defined by astrono- mers by the period beginning and ending with the conjunction of the sun and the moon. The two bodies are conjunct when they are zero degrees apart. The faster moon then races ahead of the sun, makes a 360-degree arc, and then conjoins the sun again, com- pleting a cycle. This process takes a mean time of 29 days, 12 hours, 44 minutes, and 2.78 seconds. This period may vary by as much as 13 hours. 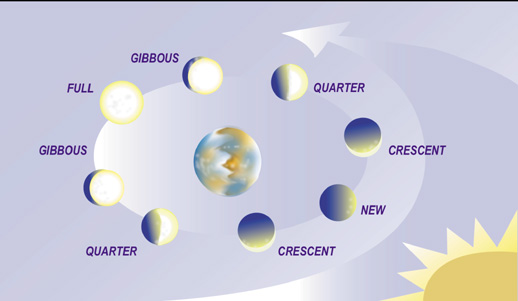 The 29-day lunar cycle was related to the DJIA on a day-by-day basis. This calculation was performed by PC as any other cycle computation would. The difference between this cycle and any other, such as the annual or 1-year cycle, is the method of choice of starting date. The starting date was the day of the new moon. The ending date is the date of the next new moon. Indeed, there may be no causal relation between the moon and prices, but the time series that will be utilized to define the cycle will be determined by lunar motion, just as the annual cycle is determined by our calendar which is derived from the solar cycle.

The cycle study is conducted through a series of steps: 1. A list of dates of all lunar cycles from 1915 through 1994 was calculated. See table 1 as an example. 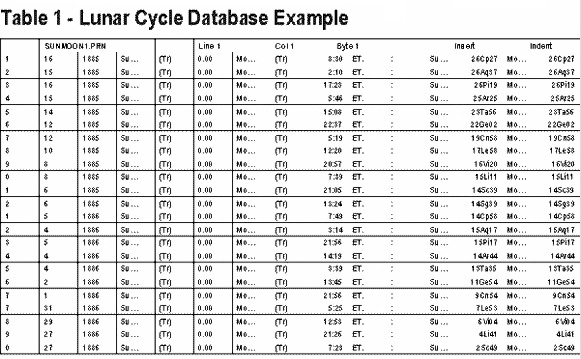 2. This database of dates is then instructed to access a daily DJIA quotes from the price database. The program then selected the DJIA price on the day of the first new moon in 1915. In the next cell, the DJIA for the following day was inserted, and so on, through to the day of the next new moon. The PC used the Friday close when it encountered a weekend. The result was a row of prices. This process was repeated for each year, 1915 through 1994. There are about 13 such cycles per year. The sample size was over 1,000 cycles.

3. The resultant array of prices was smoothed.

4. Individual cycles were then combined to obtain a composite cycle through vector addition. This depicts the average percent change in the DJIA from new moon to new moon from 1915 through 1994.

5. Fourier least squares approximation was utilized to determine the equation of the line of this cycle. This cycle line can be projected backward or forward. The result is
graph 1.

6. This cycle line was tested versus a buy-and-hold strategy from 1960 through 1993 to determine its predictive value.

III Discussion of the Results:
Graph 1 summarizes the results. The horizontal axis represents the 29-day cycle. The gradations denoted by the dashed vertical lines are 10% of the cycle, or 2.9 days. The vertical axis represents the average percentage price change in the DJIA. For example, the DJIA has risen an average of 0.1% from the new moon to the cycle peak about 7 days later. The DJIA has then dropped 0.22 from this cycle peak to the cycle trough.

reveals that the DJIA has, on average, risen from the new moon for about 7 days. The DJIA then has bottomed about 4 days before the next new moon. The price slide seems to accelerate after the occurrence of the full moon. (This would explain why Arthur Merrill did not find turning points near the actual lunations; the top and bottom of the cycle tend top fall between the two phenomena.) 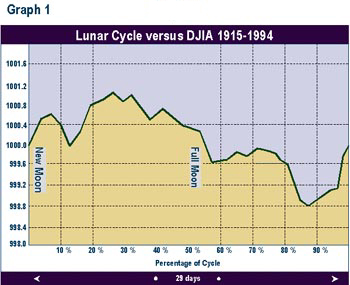 Graphs 2 through 9 depict the same relationship broken into time segments. Graph 3 shows the same relationship from 1915 to 1920 only. Graph 4 represents the cycle for the decade 1920 to 1930 only. Graphs 5 through 9 depict the cycle by decade through 1990. The period 1920-1930 (Graph 3) shows the greatest difference from the average in Graph 1. The 1960 decade in Graph 7 is similar to the average, but shows a higher peak 1 to 2 days after the full moon. In the 1970s (Graph 8) the cycle bottom occurred much earlier then in the average cycle in Graph 1. In the remaining decades, the relationship was fairly consistent with the average overall cycle. The cycle in the 1980s was consistent with average. 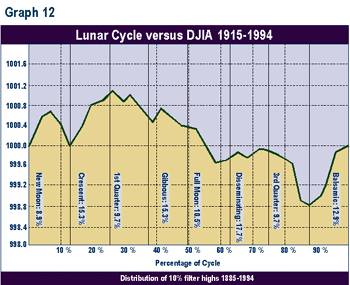 DJIA Highs and Lows in Relation to the Cycle Another test was devised in order to determine if there is any consistency to the cycle. A list of highs was generated utilizing a 10% filter rule from Arthur Merrill's books, Behavior of Prices on Wall Street and Filtered Waves. That is, all moves of less than 10% were filtered out of the DJIA from 1885 through 1994. This produced a list of 249 highs and lows. These dates were then sorted to determine where they occurred in the 29-day cycle. For these purposes, the cycle was divided into its 8 astronomic phases as in Chart 1. These 8 divisions are marked on the cycle graph as 8 vertical solid lines in Graph 12. The name of the phase appears at the bottom of the graph. The percentages represent the percent of 10% filter highs that fell in that phase historically. For example, 8.9% of all highs determined by the 10% filter method from 1885 to 1994 fell in the new moon phase. 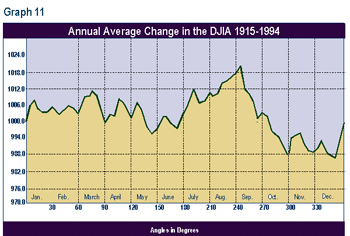 If the highs were evenly distributed, one would expect an average of 12.5% of the highs to fall in any one phase. If the cycle is indeed operative, then the highs would tend to cluster around the cycle high, the crescent, 1st quarter, and gibbous phases. Fewer cycle highs would be anticipated at the cycle bottom, the 3rd quarter phase. 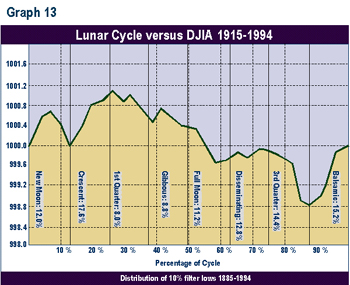 The same test was conducted for a 5% filter set of highs and lows from 1885 to 1994. This produced 851 turning points. This was done because the 29-day cycle is a short one, and the use of a 10% filter produced an average of only 2.5 turning points per year. Graph 14 depicts the distribution of 5% highs. There has been a greater percentage of highs in the second, third, and fourth (crescent, 1st quarter, gibbous) phases, the high phases of the cycle line. Graph 15 demonstrates the same graph for the 5%lows. This gave a less definitive picture of than did that for the highs. The lows tended to be somewhat more evenly distributed than the highs. There tended to be more lows in the crescent and the balsamic phases, the latter phase being the bottom in the cycle line. 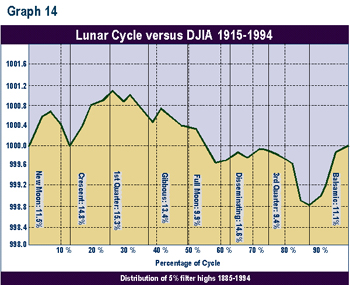